“Every tree has it’s roots and mine are in Emei and Wudang”.  The White Monkey System, called The Emei Bai Yun Bai Yuan Pai (峨眉白云白猿派) Is founded in the traditions of Emei Shan with teachings from Taoism via Bai Yun as well as shamanistic traditions of Sichuan.  The meaning of the name is quite straightforward naming the location the teachings are derived from and the one who brought them to Emei, Bai Yun 白云 (White Cloud). The white symbolizes purity as in pure yang and the yuan or monkey is a reference to playfulness. Overall the name can be understood like a poem: “The mountain which are covered in clouds and house the pure and playful monkeys”.

Below illustrates the lineage from which the E.B.Y.B.Y.P. (White Monkey/Ape System) derives.

In Northwest Hubei towards the heart of China lays a mountain range of 72 peaks with cliffs, ravines and caverns which all support the “Holy Land” of Daosim, the ancient nature based beliefs of the Chinese and the birthplace of what we know as Kungfu. Wudangshan (Wudang Mountains) has long been a pilgrimage location for martial artists, princes, philosophers, seekers, and laymen alike for thousands of years. They traveled there to cultivate themselves, seek enlightenment, strengthen and become one with the Dao.

The first daoists arrived around (25-220) during the Eastern Han Dynasty, settling to worship nature. Temples began to be erected over time, the first being The Five Dragons Temple  built in the Tang Dynasty (618-907) and the highest temple sitting up on Jin Ding. The rise of Buddhism and Confucianism rose around the Tang Dynasty as well all existing in harmony.

During the Song and Yuan Dynasties the majority of the temples were constructed.  It was during the Song Dynasty that the legendary Daoist Zhang San Feng 张三丰 arrived at Wudang, 70 years of age and already carrying with him many teachings from Shaolin. In the temples of Wudang he achieved immortality and cultivated the Dao giving us the Daoist practices of qi gong 气功, dao yin 导引 (Daoist postures for healing), and nei dan 内丹 (internal alchemy) to create Nei Jia Quan 内家拳 (Internal Boxing) or what we now commonly refer to today as Tai Ji Quan 太极拳 (Taiji 13 Postures to be exact).  The San Feng Lineage was named after him with countless disciples following in his footsteps to cultivate themselves and reach higher levels of enlightenment. Also during the Song Dynasty was the famous monk named White Cloud (BaiYun). After training with Sanfeng left Wudang to return to the root of all wushu, Emei Mountain taking with him all he had learned in 1227 AD.

The Ming Dynasty brought us Yuxu Palace at the base of Wudangshan. Also called Jade Void. Having 3 walls and hundreds of buildings all built to honor (Xuan) Wu or Zhen Wu (真武), the prince who left his family as a boy to study the Dao. After 4 decades his dream became realized.  In fact, Yuxu Palace was named after Zhen Wu, Yuxu being the name the Jade Emperor gave him once he became immortal. In about 1413 the large complex was completed, it’s 2,200 or so buildings an impressive site could be seen from afar. 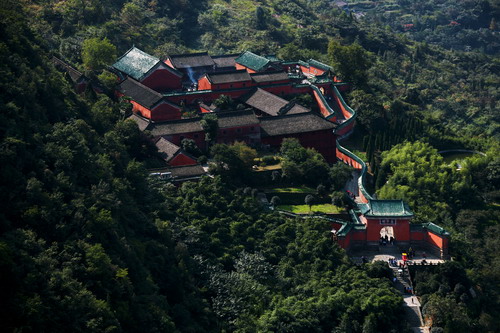 Today we are so fortunate to be able to share some the teachings of Wudangshan with students at White Monkey Taichi & Qigong, continuing the traditions of cultivation and harmony. It is my desire that all students be able to experience all the aspects of martial arts and healing while their time is spent with us.

In Sichuan Province, home to The Golden Summit rests Emei Shan (High Eyebrow Mountain). It currently exists as one of the four Sacred Buddhist Mountains of China, and has for about 2,000 years. Some scholars have attributed the 76 Buddhist Monasteries of Emei Shan to be even older though. At 10,167 Ft. Mt. Emei is the highest of all the Sacred Locations and houses the bodhisattva Samantabhadra or the Pǔxián Púsà (普賢菩薩). 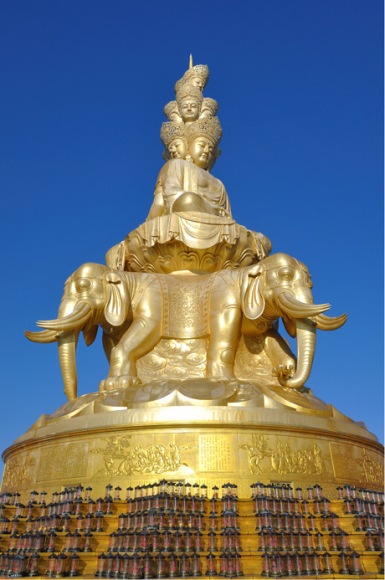 Far above the clouds one can experience the beauty and awe of the Sea of Clouds. It is no wonder so many martial artists and masters have come to Emei to train and cultivate both the Dao and Buddhism. 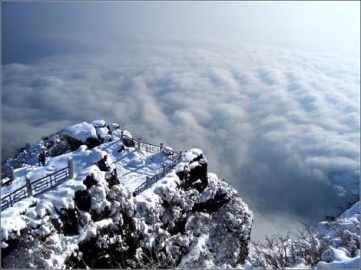 Before any of the temples were built there was just Emei Shan, untouched and perfect.  The first real master to arrive was one called Sifu Xuangong (name Baiyisan, titled Ling Dongzi). This was between 481-221 BC, far before the Buddhists influence that exists today. He imitated the apes to create the styles of Emei Long Fist and YuanYong Sword. As he always was garbed in white, he was named Bai Yuan (白猿) White Ape. From observing the playfulness and fighting styles of the indigenous apes he developed the first style of boxing called White Ape Boxing. He also mastered the 12 pillars of qigong or Emei Qizhuanggong.

In 1227 a priest arrive from Wudang on pilgrimage to the former center of Daoism, Mt. Emei. He meditated and fasted as spiritual masters guided his path towards wisdom and enlightenment. After he broke his fast he took on the name Bai Yun (White Cloud).  Bai Yun founded the Emei Qigong System which melded the teachings of Daoists with Shaolin. He also wrote the Emei Treasured Lotus Canon, a much guarded text that resides in the Beijing Museum now. During the 16th and 17th generations wushu cultivation within the monasteries were attributed to Shaolin monks although many of the mystical and miraculous feats of qigong were credited to Daoists, once living on Emei, but now on Wudang. Emei used to be titled the Seventh Heavenly Abode by the Daoists and existed long before Buddhist influences in the area.  Even now on Emei today many of the arts are long-lost to the convents and none of them practice any martial arts. Many of the secrets have been preserved and are slowly coming to light. The White Monkey Sect includes Emeiquan styles, some of which may no longer be taught in Emei and are attributed to Bai Yuan the founder of the original White Monkey Sect, of which was eroded into the ether centuries past and is now being revived by Li, Sifu.

Local wildlife includes the Tibetan Macaques who are prolific on Emei Shan and are the reason that monkey style had its birthplace on this mountain.  The first animal style of wushu is generally accepted to be this monkey style from Emei. 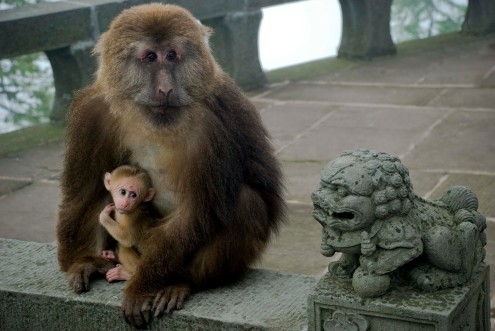 The mysteries of Emei and the strength of its qigong are carefully preserved by White Monkey Taichi and Qigong and nurtured at the  Bai Yuan Dao Center. We look forward to sharing it with our students and finding those who are ready and worthy to keep the traditions alive.

If you are interested in becoming a disciple (Tudi) of the Emei Bai Yun Bai Yuan Pai School of martial arts or to study in the Bai Yuan Dao order of Daoist Practices please contact Master Li.